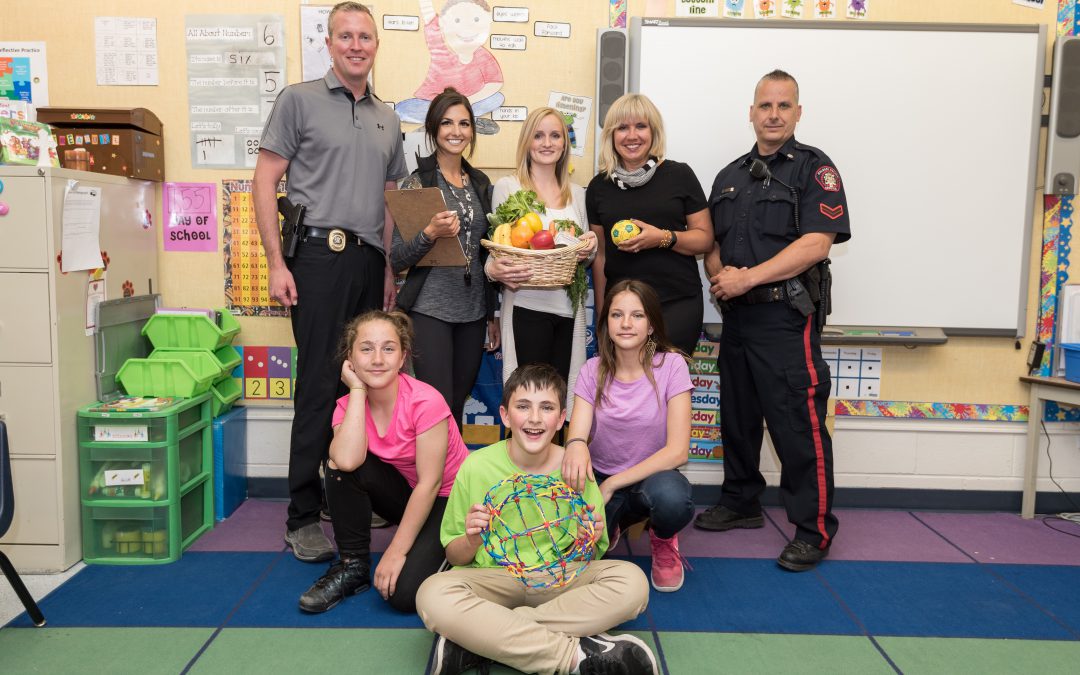 My story begins in Toronto and was not always difficult.

I grew up following all the rules, graduated high school with good marks, went to university, and began a career where I worked my way up to management.  I started a family, bought a house, had my dream job, and easily provided for my family.  And then in 2014, we moved to Calgary, it seems just in time for the economic downturn. I couldn’t secure a permanent job.  As a contractor, my husband’s opportunities were limited. We were alone on the other side of the country and financial strains led to marital strains. Suddenly, visits to the foodbank became the norm.  Life was turning upside down and looking incredibly bleak.  Home life became sullen and difficult…and our five kids were suffering for it.

So you can imagine the joy when a note came home about ISSP – an Integrated School Support Program.  Confusing at first.  What is this ISSP?  But the school welcomed us and we welcomed ISSP which provided more than just lunch or an activity for the kids.  It provided all of us with peace of mind and made us feel that we are not alone.

Marilyn, the psychologist provided by the program, was always an ear for me, a guiding light. Recognizing the guilt I felt for my family’s situation, and the fear that often overwhelmed me that someone would show up at my door and take the kids away, saying we were unfit to be parents. Her reassurance to me was priceless and her loving attention to the kids much-needed.  They fell in love with her and she gave them a safe place during the day before they came home to chaos.  Dad drinking.  Mom sullen and distant.  Depression descending upon us both. Few words and glances between the two adults in the house.

Within almost two years of living in Calgary, things got worse.  My then 10-year old daughter told me she was sexually assaulted by her grandfather, my husband’s dad, living with us at the time.  The abuse began within weeks of our move to Calgary and lasted for almost 10 months.  At the news, my husband spiralled down even further, drinking more, working less, and left me to be her advocate.  His despair and grief at the betrayal of his own father broke his heart, and his ill-assumed guilt left him tormented. I held a broken heart in each of my hands and became a robotic creature, following the guidance and advice of those I could trust, closing my own heart and mind off to anything but the next step. Marilyn walked me through the early months of this nightmare.  ISSP Police officers who knew my daughter well from being at the school, were thankfully the ones who showed up at my door for my initial report, sharing my grief and horror, giving me another glimpse of the caring community that was coming to me and my family’s aide.  We kept the truth from our other four kids until an arrest was made in September 2016.  When they found out, their barely-innocent worlds crashed in as well, stricken by the shock of the situation.  Everyone was acutely suffering.

ISSP, Marilyn, the Police officers, and the Multi Agency School Support Team (MASST) stood by our side in the darkness that leveled the next year and a half of our lives, supporting and guiding not only my daughter and her siblings, but me as well.  That part of our life is over now and with her counselling complete, my daughter is doing great.  Last June, the culprit was sent to a federal prison.

MASST.  Tony and Janice are two of the greatest blessings EVER.  They are paired coaches, Tony, a Calgary Police officer and Janice, a social worker.  They provided guidance during those dark days with a positivity that things will always get better.  They help my husband and I view our and our kids’ lives, from another perspective, one with more tolerance and patience, appreciation and hope.  With unconditional support, they embody what Community is all about and have afforded my family opportunities that completely counteract all the negativity we have had to experience and endure.  With generosity of spirit, they have ensured the kids have had activities to engage in that we otherwise could not have provided for them.  I know that at any time I can reach out and call them, and they are there for me to talk with, even coming to my place of work to lend support.

ISSP has become so much a part of our lives that when we drive down the street and the kids see a Calgary Police officer, they ask me to slow down in case it is someone they know – so they can wave and say “hi”.  To know that the kids have found Police officers to be another safe adult for them has given us such confidence that if they ever need to – they will know where to turn.  I feel confident that what could have led any of my kids down a dark road, was prevented because of these programs.  Although lots of arguing took place in the house, probably more so to do with my husband and I having nothing left in the tank, not one of our kids was drawn towards drugs, alcohol, gangs, or any societal vice.  We attribute this to the supports we received, for when my husband and I could not be there for the kids, ISSP and MASST were.  In our eyes, that’s preventative medicine right there and more priceless than any lunch program or hockey tickets or food hamper.

Holy Trinity School, Marilyn, ISSP, MASST – have all shown my family and I what the word Community really means.  What the notion of “it takes a village” really amounts to.  Never in my life would I have thought that I would need to rely on services such as these, remember, I followed the rules.  I say a prayer of thanks each day that I received them, that I receive them still.  We are all stronger and healthier emotionally, mentally, and physically because of the support everyone gave us, gives us still… without judgement, without condemnation.

I know where I live.  I know that my family’s experience over these past four years is probably but a drop in the bucket compared to other families.  I know we are the proverbial phoenix’ rising out of ashes right now, slow as that may be and still with challenges to overcome.  And I sadly know that other families may not be having the employment opportunities that are now coming to my husband and I – that they may still be struggling.  ISSP needs to remain for them, and dare I say, needs to expand into other schools and communities, for continued growth and support, because no parent or child should ever feel all alone in their struggles.

It truly takes a Community and I only know this now because of ISSP and the Calgary Police Foundation.  I look forward to the day when I can give back to those who need it – as we did.

With sincerity and appreciation, and now with confidence, optimism, and resilience, thank you Calgary Police Foundation, ISSP, and MASST for pulling our lives out of despair and back into the joy of living each day with renewed enthusiasm and love.