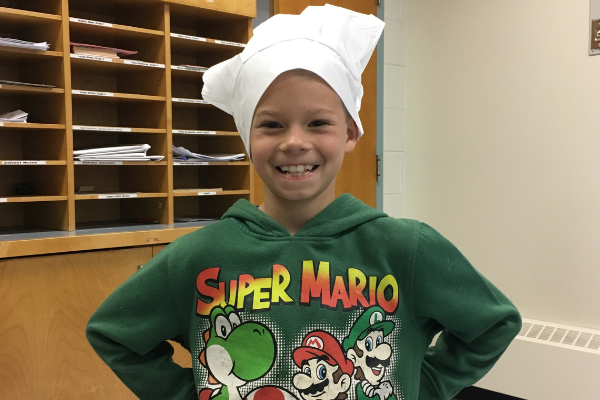 This year’s ISSP Chief Youth Courage Award recipient is Dylan, a grade five student at Holy Trinity Elementary School. When ISSP and MASST first began working with Dylan, he had difficultly building relationships with his peers and often preferred the company of adults. He also struggled at times with regulating his emotions and sometimes experienced outbursts at school.

Through the wraparound supports offered by ISSP and MASST, Dylan was able to work on improving his social skills, developing resiliency, and embracing a more positive attitude. Once they were able to tear down the walls that Dylan had put up, his MASST team discovered Dylan’s love of cooking. He would always speak about the meals he helped his dad make at home and the team began channeling Dylan’s passion for cooking at school. Dylan began working with the school to plan a menu for lunch once a month and quickly became known as “Chef Dylan” throughout the school.

With ISSP support, Dylan has made positive changes in his behaviour and is better prepared to cope with the challenges in his day to day life. He has gained valuable problem solving skills, a positive attitude, and his infectious smile brightens the hallways at Holy Trinity. ISSP staff have no doubt that Chef Dylan has found his career path and they can’t wait to eat at his restaurant in the future!

FAST FACTS: GET TO KNOW DYLAN

Who is your hero? All of the grown-ups in my life are my heroes. They always help me if I don’t understand things.

If you could live anywhere in the world, where would you live? California because it is warm and Disneyland is there.

Why do you think you were nominated for this award? I think I was picked because I worked hard and was doing well in class.