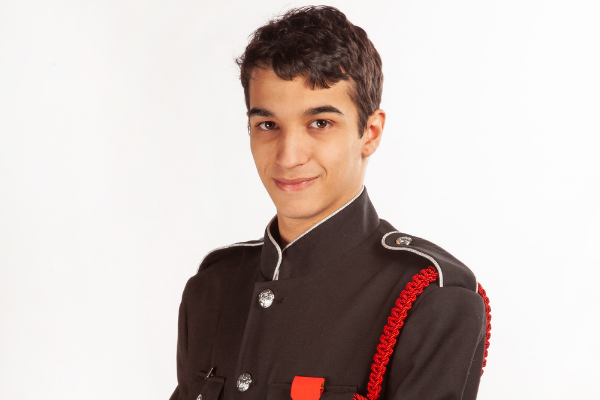 Mateo has been a member of the Calgary Police Cadet Corps for the past four years. During his time in the program, Mateo has continued to grow and has developed a strong sense of citizenship. He has contributed over 100 volunteer hours within the Calgary community and even won the coveted Citizenship Award for the 2018/2019 year.

After speaking with both Mateo and his father it is evident that Mateo puts 110% effort into everything that he does – and the Cadet Corps program is no exception. He has never missed a single day and continues to show an extremely high level of dedication in all aspects of the program. Mateo even took on an additional responsibility by joining the Calgary Police Cadet Corps Pipeband, something he is very proud of, and he is now an accomplished piper. When asked to describe Mateo at home, his father tells us he is motivated and accountable, with a high drive and determination to do what he has agreed to do. With the strong support of his family, Mateo is able to thrive.

Mateo is a natural leader and will often volunteer to help the younger cadets reach their goals. Mateo understands the importance of discipline and is not afraid to keep others in line while holding them to a high standard, which is a fundamental requirement of the Cadet Corps. He leads with authority, confidence and compassion for others and will be a remarkable leader in the years to come.